Flying, I’ve found, is nothing but a very complex game. And, as a textbook firstborn, I prefer to play games I can master–and win. Alas, where there is always a ladder to a faster, better way around things, there is also a chute that will slow your progress completely.

Also much like a game, there’s always a way to cheat. Some cheat moves are fairer than others (like cutting the security line with a status card), some are all right when necessary (jostling seats to accommodate a family that has been separated), and some are reprehensible. Like boarding outside your zone.

For those of us that spend a fair amount of time flying, the little perks accumulated that allow for sanctioned cheats start to mean everything. Especially early boarding (which in this super fun metaphor, would be a ladder). So when someone tries to get around this rule, whether by cunning or stupidity, I get stabby. 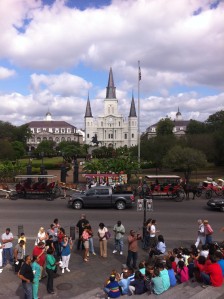 On my way to New Orleans last week (E had a conference and I decided to tag along and get in some shopping and eating in a new city), there was just such an example.

As with most of the flights I’m on, the flight to New Orleans was delayed. I find that this fact seems to up the quotient of people (especially those with status) not only cheating at boarding, but feeling completely justified in doing so. As if their ‘time served’ in the boarding area entitles them to board whenever the F they feel like it. What’s even more annoying than this fact is that they usually get away with it. There’s nothing more a dedicated rule-follower loathes than someone who breaks the rules without consequence. It’s hard being so virtuous.

But I digress. Back to C25. A half hour late, we began boarding. I had been “vulturing”, as E and I have coined it, on the boarding lane since it became clear that Lenny, the gate agent, would be moving us all through as fast as possible. After pre-boarding some delightful old Russian ladies, he called for First Class and all of the vultures took an unconscious step forward.

I had noticed a pair of Diamond fliers off to the right of the boarding lane since I’d started my hover and now I saw that they were inching closer to the scanner, presumably to sneak on with the First Class cabin. As noted, I see this happen all the time. Should I be so worked up about it? Probably not. But it’s the principle of the thing. 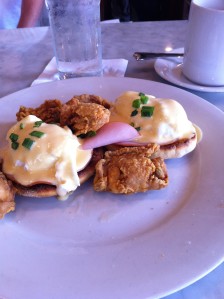 Eggs Benedict with fried oysters? Sure, why not?

Luckily, much like Roger from the other week, Lenny was ON. IT. As they shiftily sidled up to the scanner, Lenny asked them if they were First Class. When they admitted they weren’t, he asked them to slide down the chute and wait for the Sky Priority Zone to be called. After they only shuffled a step back, he asked them to remove themselves all the way off the boarding carpet. I chipped in by giving them the Stink Eye to let them know their hijinks hadn’t gone unnoticed. It was awesome.

Although I realize the Lennys of the world are few and far between, it was a nice win for the Rule Followers and the perfect start to a long weekend of shopping, eating, and Jazz Fest-ing.