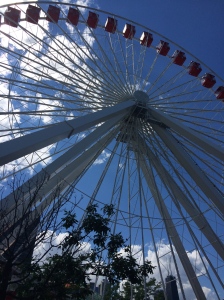 The ferris wheel at Navy Pier

For this story, we won’t even need to leave the gate. Headed to Chicago for a conference, I was ever so patiently lurking around the gate while the (late-to-arrive) plane was emptying out. (This is my usual MO for boarding an aircraft because I don’t enjoy leaving anything to chance–such as whether or not there will be overhead bin space. Even though I board right away, I like to control the uncontrollable. It’s part of my charm.)

At any rate, lurking as I was, I didn’t realize just how close I had ventured to the gate area until an elderly couple got off and came up to me asking where the C Concourse was located. I pointed them in the right direction and commended myself on living up to the “Minnesota Nice” hype. I figured it was just a one-off until a middle-aged woman approached me and asked if I could get her a driver to take her to baggage claim because she had a foot injury. I told her to ask one of the nearby agents in a red vest as those are the Delta concierge staff. She thanked me and headed off toward a guy with a walkie-talkie.

Now I was a little flustered and looked up to see a man catch my eye. He laughed and said, “You’re under a monitor and these people seem to think you work for Delta.” At first I just chuckled politely because I think it’s pretty clear I wasn’t working for Delta (what with my luggage and phone and all…and no, I had left my red vest at home that day), but then he pointed above my head and I realized I was standing underneath the monitor that’s at each gate with the connecting flight information and recalled that they usually make an announcement when you pull into the gate that there will be an agent by the information screen to help. Apparently I was now that agent.

While profusely blushing, I muttered a “Thanks” to the man and stealthily scooted back a few feet. I really hope everyone else on that flight figured out where they were going…