After all the excitement of attempt #1, we were a little anxious about getting ourselves back to the airport the next day. We left very early and the driving went smoothly (we even got a front row spot in the Gold ramp) and E was able to slowly make it through security without turning his neck aggressively.

“I am SO jet-lagged from that leg we just did from Hong Kong!”

“I know–it’s almost as bad as that flight when we went to Machu Picchu.”

“Where are we going after this trip? I wouldn’t mind going back to South Africa.”

“I’ve been there twice now…what about southern Vietnam? I hear the beaches are terrific.” 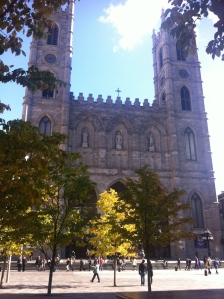 And this went on and on. And on. I could almost feel how badly they wanted my attention. It was like watching a really horrible community theater production where the actors are begging you to like them.

I have to say though, having the travel-upper troupe as our biggest aggravation was a welcome respite after the previous day’s shenanigans. And, finalement (as I would say if I were a real Québécoise) we were in Montreal!

It was my first visit to Montreal and the city was everything I hoped it would be–great food, lovely people, a familiar dialect (eh). Plus, we had a lovely time seeing E’s family and celebrating a great wedding (gotta appreciate a family with a love of hitting the dance floor).