Delta, Oy, what rock did you come from under?

In case we haven’t already established it, I am short on patience. (And if you’re hoping from the title that I actually learned a lesson in the virtue of patience, you may be disappointed.) My recent flight to Phoenix for a work conference only confirmed that I should probably have my blood pressure checked.

At any rate. The ways my patience was tried–let me count the ways…

With the editor-in-chief of Inc. Magazine accepting the Inc. 5000 award

Luckily, everything was much better once I made it to Arizona (well, once I located the taxi stand. Not big on any extra signage in the basement of the airport). I spent my days going between the ice-cold conference rooms and the sweltering 100 degree oven that is Phoenix.

Then, E flew down Friday once his conference in L.A. wrapped up to escort me to the award ceremony of the Inc. 500 | 5000 conference (where I picked up my company’s hardware, see right) and we spent the following day exploring Sedona. All in all, a great getaway to the southwest.

I’m sure it’s been unbearable without my frequent updates so get excited–my next trip is Thursday as we are off to Canada for a family wedding. Hopefully my patience will not be further tried. 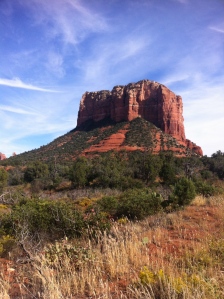 1 thought on “A Lesson in Patience”