all out disasters, by request

I mentioned in my last post that I’d write a future installment with commentary on specific airports that have caused me headaches (and blisters!). What was mostly meant as an off-handed comment actually brought some very specific requests for these posts to take place. So, much like the deconstructed baggie post, away we go! 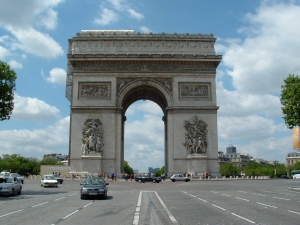 L’Arc de Triomphe, safely taken from the center of traffic by my father.

I bet you thought I’d start with ATL but honestly, some of the most poignantly awful experiences I’ve had in an airport reside at Charles de Gaulle in Paris. I know that this has the propensity to sound like a White Whine submission, but it’s the truth. Here are the top three memories I have from disasters at CDG:

I should probably note at this point that Paris is my all time favorite city. I could/would/probably should live there.

I should also probably note that I flew to CDG about a year ago and everything was running much more smoothly than when I encountered the above situations. Regardless, a million disasters at CDG could never diminish my love of Paris.

If they run out of wine, we may have to reassess.

2 thoughts on “Airports I’ve Known and Loathed, Part I – CDG”